Best part, it was a complete surprise to her!

The Shot and Celebration 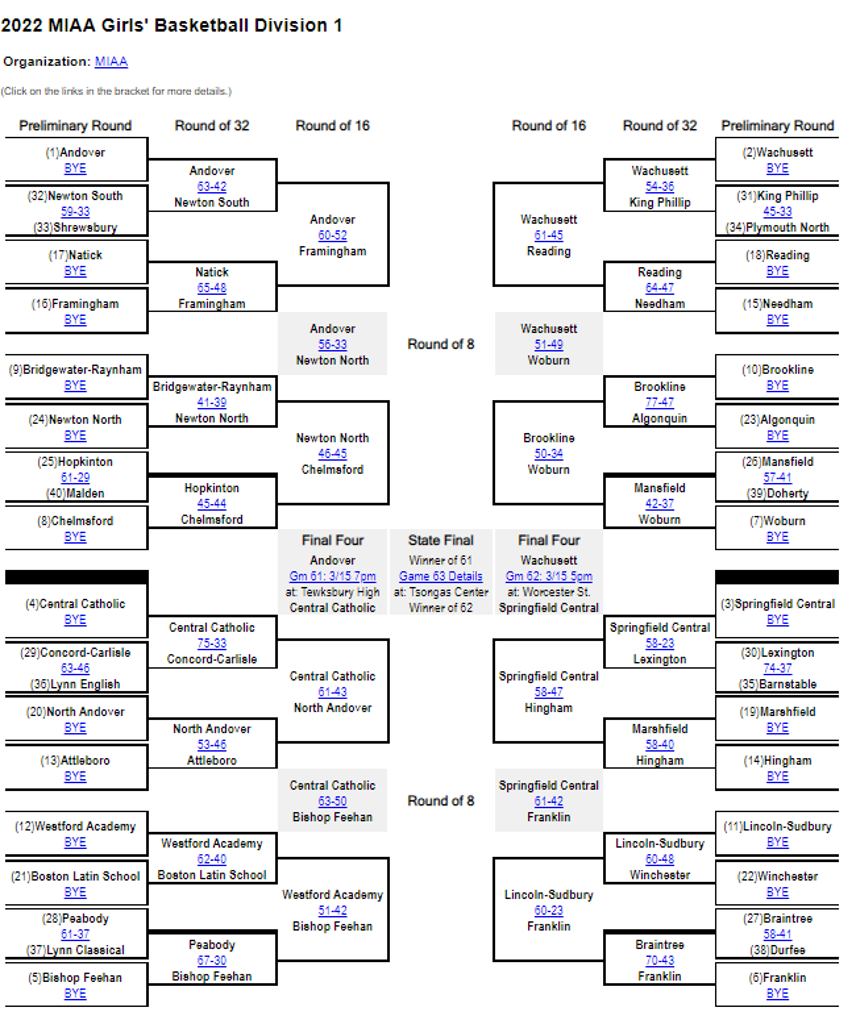 @harborwomenlax Congratulations to Kyle Wilson who notched her 100 career point against Plymouth North on Tuesday! 🥍

She Had No Idea

At the start of this season, Mark Blasetti and I were chatting.

When asked if Perry could eclipse the 1,000 point barrier, I said it would be a tall order.  She would need approximately 400 points in the final 20 games of the regular season to stand a chance.

I didn't think much about this topic until last Tuesday evening, when Jim Quatromoni briefed me on the plan for the Friday's nights playoff game against Marshfield.

After the 35 point outburst in the season finale against the Rams, Blasetti stood just nine points away from 1,000.

Unlike Grace Bennis, who accomplished the feat in 2020, everyone knew about the point count and it was during the regular season.

This time, it was a very small group of people who knew.  The group was so small that not even Perry knew, nor did my companions (Mike and Lea) at the table know.

This time the feat would be accomplished during a MIAA state tournament game.  The protocols for stopping the game, the announcement, switching tournament game balls, and on court celebration would be very different.

The decision was made to halt the game at the next dead ball after the barrier was broken.   Jim Quatromoni would present the game ball to Perry and parents at center court, a couple of quick pictures, and let's move on.

That decision was brilliant.

Perry's points came slowly at first; a free throw here, a layup there, another free throw there and early in the second quarter of a low scoring affair; she stood at six.

The shot was a three ball.  From the left wing, a perfect arc, which from my seat at table was money as it left her hand.

Marshfield went back up the floor, the fans from both sides screaming.  But no one thought about her last shot.

The dead  ball was underneath the Marshfield basket.  It may have been a foul on Hingham.  But don't quote me on that!  The two teams combined for over 20 in the first 16 minutes of action.

I rang the buzzer longer than usual and proceeded with the announcement.

"Ladies and Gentlemen, Boys and Girls may I have your attention, please.  With that last basket, Perry Blasetti has become only the second player in school history to score 1,000 points!"

As I uttered the words, "only the second player", the Hingham bench erupted and rushed the court.  They knew what I was about to say next, but it hadn't hit Perry yet, nor her on the floor team mates, or the Marshfield Rams.

In fact, if you see video of the event, the bench storms and mugs Perry, followed the players on the floor, and the Rams are trying to get out the way.

Perry received the game ball, pictures were taken, I introduced both big sisters Sydney and Ryley (who drove in from St Rose College for the occasion).  Haley who is the captain of Sienna Women's College team, is on the road traveling with the Saints and unfortunately couldn't attend.

After the game, there were more pictures and interviews from the media covering the game.  With rare exception, the media had no idea that this could happen.

What a curtain call for the Blasettis.

With the new state tournament alignment, there will be more road trips.

Previously, the tournament was conducted regionally and it was only at the sectional finals level did travel increase, but it was still local in nature.  For the past several seasons, the South Sectionals were held in Taunton.  The state semi-finals were held the TD Garden, and state finals were either in Worcester, Springfield, or Lowell.

Looking at the bracket, the road to Lowell (the location for state finals, and there will be no stop at the TD Garden on route) will be difficult for the Harborwomen.

First stop is the rubber match with #19 Marshfield.

It's the third game between the two Patriot League teams in two weeks.  Each team has a victory on the others home court.

The teams know each others strengths and weaknesses.  Perhaps, the advantage in this third and final meeting of the season is the gym itself.

If you haven't experienced a MIAA playoff game in the cozy, little, bandbox called Hingham High School, then where have you been?

Unlike a regular season game, the crowd noise is deafening.  The standing room only crowd literally envelops the court.  Hingham feeds off the energy created in this environment.  Visiting teams often have difficulty communicating with each other.  This generally leads to turnovers and greater crowd noise, etc.  In short it's a true sixth man advantage.

Assuming Hingham survives, the first road trip is on store.

A trip to my last place of residence Springfield.  Yes, the birthplace of basketball;  110 miles and 1 hour and 43 minutes by car door to door from Hingham.

Traditionally, Central have strong football and boys basketball programs.  However, the girls program is a bit of an unknown.  In addition, the competition in Western Massachusetts isn't as difficult as in the East.  There are fewer conferences and schools.  Most of the schools that Central play are seeded in the Division 2 bracket.

I won't say that this game will be easy, or that Central (16-1) is overrated at number three.  But assuming, Hingham survives Marshfield and that's a big assumption, I feel optimistic about a potential trip west.

Assuming Hingham is still standing at this point, this where is gets really interesting.  Traditionally, this would be Sectional Semis.  In the state tournament format, it's the round of eight.

The game must be played at a facility with a minimum of 1,000 seats.  In all likelihood, the opponent will be a higher seed (#6 Franklin or #11 Lincoln-Sudbury).  It's entirely possible this will be a neutral site game, unless the host school can meet the seating requirement.

Should the unthinkable bracket buster occur, and either Braintree at 27 or Winchester at 22 is the opponent (giving Hingham the higher seed), the game can't be played at the High School as the seating capacity is insufficient.  Therefore a neutral site is assured.  So in any case, if the Harborwomen are still standing, pack your bags.

The Sectional Finals has been replaced by the Final Four.  Based on the fall tournaments, each team that captured a final four slot, received a banner, similar to winning a sectional final championship in previous years.

The site for this game is determined by the MIAA and will be neutral.  Hence another road trip.

Final stop is the state championship game at Tsongas Arena in Lowell; the final road trip.

If you are wondering why there isn't a stop at TD Garden this year.  Just ask MIAA State Basketball Tournament Director, Jim Quatromoni.

Yes, our very own Hingham's AD is the man in charge.

By the way, any school that complain about traveling, should look no further than Hingham.  The Harborwomen would travel to Springfield in a potential round 2 game, and the Harbormen travel to Lawrence for Round 1 game with Central Catholic with a victory at home in the preliminary round.  Q didn't pull any strings for this school!

As for the lack of the TD Garden it's come down to available time slots.

There are now five divisions instead of four.  The state finals now have ten games (five boys and five girls) spread over Friday evening, Saturday and Sunday at Tsongas.  This schedule wasn't an option in Boston.

The Garden had been the site for the state semis.  If I recall, only Division 1 and 2, and term the "semis" were a misnomer.

The games played at the Garden represented one half of the bracket.  Whichever sectional rotated to play Western Mass didn't go the Garden.  Therefore, the number of games at the TD Garden were only four (two girls/two boys D1 and D2).

Statewide, there are 20 semi-finals games.  Even with alternating years (the Garden hosting the boys semi one year, and the girls the next) only reduces the number to 10.  While during the regular season, games can be scheduled every 90 minutes, my experience tells me the semis require 120 minute spacing.  Therefore, you need 20 hours of arena time to host one half of semis.

The long standing state sectional tournament format is no more.

Beginning this season, the MIAA has adopted a state wide tournament format.

In basketball there are five state wide divisions.  Teams are "power ranked" within each in division across the state.  The ranking is based on point differential/ margin of victory.  There is little consideration given to strength of schedule or power conference, etc.

It in projected that in Division 1, there will be 32 team field.

Despite the Harborwomen's 15-5 record, it is very likely that Hingham won't receive a home game.

OK, I will admit when I am wrong.

Perhaps given the final power ranking of the season, the Harborwomen will receive a home game after all.  Let me explain.

Hingham finished 14th.  The highest seed from the Patriot League with Marshfield a close second at 16.

Where's Patriot League Whitman-Hanson ?  Fifth in Division 2, along with North Quincy at 8, Scituate at 23, and at 28th.

Remember the Patriot League is comprised mostly of Division 2 schools.  While Hingham has been a Division 1 school for several years, Basketball had been played at a Division 2 level until this season.

The Harborwomen had been ranked as high as 8th and as low as 16th this season.  The final ranking was influenced by the late season wins over Whitman-Hanson, the comeback against Marshfield, and the domination in the Weymouth Hearts Tournament.

So there should be one home game.  The size of the bracket will determine the opponent.